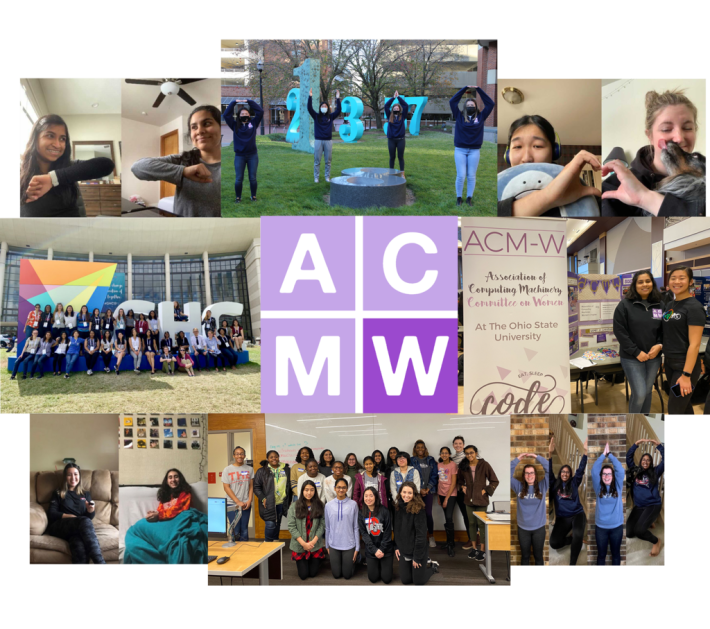 For the Outstanding Diversity Program award, ACM-W partnered with Cool Tech Girls to organize the TechnoFashion Design Challenge. This was a virtual program that gave young female students around Columbus exposure to electronic sewing and Arduino programming. ACM-W volunteers helped to organize the program as well as assisted students with developing their projects. This program gave confidence to young girls that they can be programmers and engineers.

For the Outstanding Student Organization Program award, ACM-W started the Big-Little Bit Mentorship Program in Fall 2020 in order to foster connections between upperclassmen and underclassmen. Throughout the semester, ACM-W had mentorship meetings, bit-challenges, and active engagement in group discussions. Because of this program, ACM-W was able to build a community and create a support system during these stressful times.

For the excellence award in Organizational Operations, ACM-W was able to budget their finances to support 37 students to attend the virtual Grace Hopper Celebration, a conference dedicated to women in computing. The Grace Hopper Celebration is an impactful event as students are connected to women leaders and role models. ACM-W also created a new web application to keep track of meeting attendance, scholarship requirements, and member information. Additionally, ACM-W partnered with other student organizations on campus to put on events such as social mixers or a food drive.

For the excellence award in Member Development, ACM-W helped connect students to companies through various events such as Eating with Industry, a virtual networking night with companies. ACM-W also held professional development workshops that helped students update their resume and LinkedIn page. ACM-W also started a new communication group through Slack in order to connect members more easily in the virtual environment. Through both career centered events and socials like embroidering bucket hats, ACM-W strives to help their members succeed during their academic career.

ACM-W also won Outstanding K-12 Outreach and Overall Outstanding Student Organization within the College of Engineering and KSA. ACM-W had numerous outreach events throughout the year, including a Python Turtle Workshop, Scratch Workshops, and Code I/O which was a day long virtual hackathon for middle students. ACM-W also won the 2020 Ford College Community Challenge where they received a $25,000 grant to expand their outreach efforts. As a result, ACM-W started the Makey Makey: Unleash Your Creativity program in Spring 2021 with plans to continue and expand the program for future semesters.

Overall, ACM-W is dedicated towards supporting students and improving diversity not only at Ohio State but in the surrounding community.