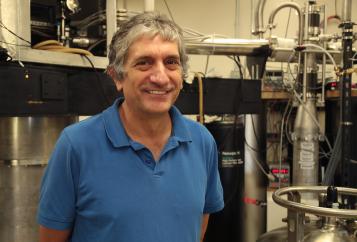 The promise of quantum computers is that certain computational tasks might be executed exponentially faster on a quantum processor than on a classical processor.  We have used a programmable superconducting processor to create quantum states on 53 qubits, corresponding to a "parallel computation" of 10 million trillion states.  For a simple algorithm, our Sycamore processor takes about 200 seconds to run a quantum circuit a million times - the equivalent task for a state-of-the-art classical supercomputer would take approximately 10,000 years. This dramatic increase in speed compared to all known classical algorithms is an experimental realization of quantum supremacy, heralding a much-anticipated computing paradigm.

John M. Martinis is a professor of physics at the University of California, Santa Barbara. He received his Ph.D. in physics from the University of California, Berkeley, where he pioneered research on superconducting quantum-bits. Before joining UC Santa Barbara in 2004, he worked at CEA France and later at NIST Boulder as a postdoc. In 2014, Martinis joined the Google Quantum-AI team to head the effort to build the first useful quantum computer. In the same year, he was awarded the London Prize for low-temperature physics research on superconducting qubits. In 2019, Martinis and his team published a paper on Nature with title `Quantum supremacy using a programmable superconducting processor’, where they presented how they achieved quantum supremacy for the first time using a 53-qubits quantum computer.  He is the recipient of the 2021 John Stewart Bell Prize for his Research on Fundamental Issues in Quantum Mechanics and Their Applications.